The Trust Deed sets out the doctrinal basis of the church in words in heavy type which begin each of the following paragraphs. While the Trust Deed does not mention the Baptist Confession of 1689, the terms used in the Trust Deed clearly indicate that those who drew up the doctrinal basis had that
document in mind. The words in the following paragraphs which follow the heavy type are explanatory of the headings as in the 1689 Confession and /or in terms of the Shorter Catechism. Because of errors which have infiltrated into churches of Protestant Dissenters since the date of the Trust Deed was drawn up, paragraphs 1 & 2 are added to the Doctrinal Basis and are in accordance with the doctrinal teaching set out in the Baptist Confession of Faith 1689.

The Son of God, the second person of the Holy Trinity, being very and eternal God, the brightness of the Father’s glory, of one substance and equal with Him who made the world, who upholdeth and governeth all things He hath made, did, when the fullness of time was come, take upon Him man’s nature, with all the essential properties and common infirmities thereof, yet without sin; being conceived by the Holy Spirit in the womb of the virgin Mary, the Holy Spirit coming down upon her and the power of the Most High overshadowing her; and so was made of a woman of the tribe of Judah, of the seed of Abraham and David, according to the scriptures; so that the two whole, perfect and distinct natures were inseparably joined together in one person without conversion, composition or

confusion; which person is very God and very man, yet one Christ, the only mediator between God

Three equal persons in the Godhead.
There is but one God and within the unity of the Godhead there are three persons, of one substance,
equal in power and in glory: God the Father, God the Son and God the Holy Spirit. The three persons
in one God are known as the Holy Trinity.

Eternal and personal election.
God did not leave all mankind to perish but from all eternity elected some to everlasting life.

Original sin.
God made all things, creatures and man in the space of six days and all very good, but our first
parents (Adam and Eve) fell from the good estate in which they were created by sinning against God,
into a state of sin, which is the corruption of man’s whole nature commonly called “original sin”.
Because all mankind is descended from our first parents everyone conceived and born of mankind
has this corrupt nature (original sin).

Particular redemption.
God decreed before creation to save some out of every kindred, tongue, people and nation. He
particularly and unchangeably chose those that should be so predestined to everlasting life, making
provision for their redemption by the incarnation and work* of God the Son in the person of the Lord
Jesus Christ. (* Because of errors arising in the 19th century it is necessary to mention specifically
that an essential part of the redemption work of the Lord Jesus Christ was His sacrificial offering of
His own blood upon the cross - Eph. 1.7; Col.1.14; Rev. 1.15; Acts 20.28; Hebrews 9.12, 22, 26).

Efficacious grace in regeneration.
All whom God had predestined to everlasting life, God by His grace effectively called by His Word and
Spirit out of the estate of sin in which they are by nature to grace and salvation in Jesus Christ.
Thereby a new nature enlightens their minds, renews their wills and enables them to embrace the
Lord Jesus Christ offered to them in the gospel (which is regeneration).

The law as the perfect rule of conduct for all believers.
By the law is meant the moral law (mainly the 10 Commandments) which the Lord Jesus Christ in no
way dissolved but much strengthened their obligations). No man can keep the law perfectly and the
striving to keep the law rather condemns them in their sin. Nevertheless the giving of the law of God
reveals a rule of life informing mankind of the will of God. Accordingly believers keep that law to
please Him, out of gratitude for their pardon and everlasting life and all other blessings they have
obtained in Christ, that their lives may glorify God.

Marriage is to be between one man and one woman; neither is it lawful for any man to have more

than one wife, nor for any woman to have more than one husband at the same time. Marriage was

ordained for the mutual help of husband and wife, for the increase of mankind with a legitimate issue,

and the preventing of uncleanness. It is lawful for all sorts of people to marry, who are able with

judgement to give their consent; yet it is the duty of Christians to marry in the Lord; and therefore such

as profess the true religion, should not marry with infidels, or idolaters; neither should such as are

godly, be unequally yoked, by marrying with such as are wicked in their life, or maintain damnable

heresy. Marriage ought not to be within the degrees of consanguinity or affinity, forbidden in the Word;

nor can such incestuous marriages ever be made lawful, by any law of man or consent of parties, so

The personal perseverance of the saints.
(The “saints” is a synonymous word for the “elect” and “believers”). Those whom God has elected,
predestined and effectually called can neither totally nor finally fall away from the state of grace into
which they have been brought but shall persevere therein to the end and enter into everlasting life.
This perseverance of the saints does not depend upon their own diligence (yet they are to be diligent)
but upon the efficacy of the work, merit and intercession of the Lord Jesus Christ and the abiding work
of the Holy Spirit.

The future judgment - the eternal happiness of the righteous and the endless misery of the
impenitent.
God has appointed a day in which He will judge all mankind – living and dead - by the standard of
righteousness that was in the Lord Jesus Christ. Those who are found to be righteous by that
standard by the imputation of Christ’s righteousness to them (see section 7 above) will enter into the
eternal happiness of heaven (everlasting or eternal life); and those who have not that standard of
righteousness - the impenitent - will enter into the endless misery of hell. 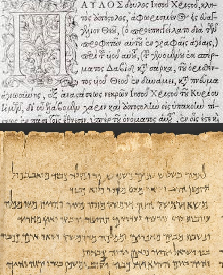